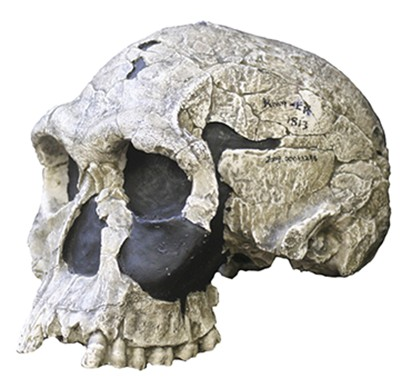 The strange case (fraud) of Homo habilis, the man who wasn’t there, (and still isn’t).

Yesterday upon the stair
I met a man who wasn’t there
He wasn’t there again today
I wish, I wish he’d go away
-William Hughes Mearns

Louis and Mary Leakey were the twentieth centuries’ foremost fossil hunters. Louis, the son of Christian missionaries, had grown up in British East Africa, (now Kenya). In spite of his Christian upbringing, Louis was an ardent evolutionist who was determined to solve one of human evolutions’ most significant problems, finding the missing link between apes and humans. You see, in the 1960s the theory of evolution had an enormous problem, there were no transitional fossils to bridge the gap between ape fossils and human fossils. If evolution were true, if small genetic mutations had caused humans to develop slowly over millions of years, it followed to reason that there should be a lot, (read millions), of transitional fossils. But none had been found.

Fossils had been found of both apes and humans, but nothing in between. Australopithecine had been discovered in South Africa by Raymond Dart. The word Australopithecine means “southern ape,” and it is widely accepted that the fossil are of an extinct non-human African primate. Also discovered was Homo erectus, which is widely accepted to be the fossils of a human. It was this chasm, this gaping black hole between humans and apes, that the Leakeys wanted to fill with Homo habilis, (“handy-man” a/k/a the man who wasn’t there). Working in Tanzania, the Leakeys found some fossils that they thought were likely candidates to be human. The fossils consisted of skull fragments and parts of hands and feet. The Leakeys dubbed these fossils Homo habilis and gave the remains colorful human names like Cinderella, George, and Twiggy. Earlier some stone tools had been discovered and attributed to another group of fossils, but they were restyled as the possessions of Homo habilis, and a star was born. The new taxon, (the name applied to a taxonomic group), was said to be the 1.8 million-year-old missing link in human evolution. This claim was based upon little more than the hubris and celebrity of Louis and Mary Leakey. Homo habilis continued to be considered a missing link for more than 20 years, in spite of a complete lack of evidence that the fossil fragments found by the Leakeys belonged together.

It was not until 1986 when researchers in Tanzania discovered a more complete fossil that Homo habilis was exposed as a fabrication. George Washington University Professor, Bernard Wood, a leading authority on human evolution, would declare that the fossil belonged to the taxon Australopithecine. The most revealing fact is this; researchers are still trying to resurrect Homo habilis, the man who was never there. Their reason, they still need that missing link. A clear case of necessity being the mother of invention. The truth is that they will never find that missing link, because God created man, in His own image, on day six. God created the world, and everything else that was created, in six literal days, and you can believe it.