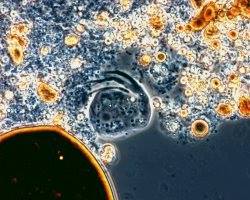 What happens to oil that’s spilled into the ocean? It’s eaten. As it turns out God has a contingency plan for oil spills. According to Terry Hazen, a researcher at the University of Tennessee and Oak Ridge National Laboratory Governor’s Chair for Environmental Biotechnology, there are bacteria in the Gulf of Mexico that broke down the oil after the Deepwater Horizon spill. “With more food present in the water, there was a population explosion among those bacteria already adapted to using oil as a food source. It was surprising how fast they consumed the oil. In some locations, it took only one day for them to reduce a gallon of oil to a half gallon. In others, the half-life for a given quantity of spilled oil was six days,” said Hazen in a press release. So if we had merely contained the oil in the water after the spill instead of letting it float ashore, there would not have been substantial environmental damage.
So that begs the question: if there are bacteria that eat oil, how can it be that the world’s oil reserves are millions of years old? For years secular scientists have been telling us that the oil underground is not eaten by bacteria because it is too hot. Scientists claimed that 16,000 feet deep it is just too hot for microbial activity. They argued that the extreme temperatures of over 176 Degrees Fahrenheit would pasteurize the oil by killing all of the microorganisms. Now, like many things we once thought were a scientific fact, we are learning that this is not true. In a recent study spanning ten years and involving 1200 scientists for 52 countries, researchers discovered vast amounts of microbiota (bacteria and archaea) are underground. In fact, the research suggests that 70% of all such microorganisms exist underground at temperatures as high as 250 degrees Fahrenheit. They estimate that the combined weight of these organisms weighs hundreds of times as much as all the people on Earth.
So back to our question: how can the Earth’s oil have lasted millions or billions of years underground without being decimated by bacteria? The obvious, (and correct) answer is that it could not have. The question is no problem at all when you consider the vast amount of organic materials that would have been buried in Noah’s global flood and then formed into oil only about 4,000 years ago. It’s just not possible that all these organic based materials would have lasted for millions of years. God created the Earth, and everything in it in six literal days, not that long ago, believe it!.